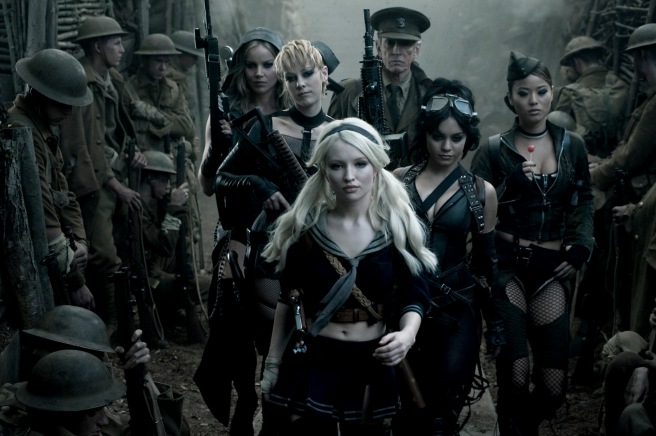 I have been watching the interesting, highly erotically charged movie ‘Sucker Punch (2011)” in effect it is an extended dream sequence about an abused young woman who is incarcerated in an asylum and then lobotomised. The lobotomy method is particularly gruesome, inserting a long spike up through the nose into the frontal lobe, in effect reducing the ‘Baby Doll’ to a vegetable. Obviously the pharmacological resources available to the doctors (the story seems to be set in the 1950′s) was somewhat limited. At the time a rather broad view was taken of the remedial methods available and acceptable for helping the mentally ill, which, I am sure has contributed to the fear and loathing of the mentally ill (‘possessed’ and ‘dangerous’) and indeed of the institution of psychiatry in general. This rather dark prejudice is capitalized upon in the unspeakably awful sexually charged Marquis De Sade atmosphere of the mental hospital, where ‘Baby Doll’ is taken, filled with lecherous aggressive misogynistic males, and enabling passive females living in fear mostly. ‘Baby Doll’ is, by the way, not a baby, but has a rather doll-like face, being twenty years of age, and she is wrongfully accused of killing her own sister. The central point of the story is around the lobotomy. Indeed the story seems to take place in the moments before the lobotomy actually happens. Just as the protagonist (Baby Doll) is about to have her personality irrevocably smashed with a shiny metal spike she begins to dream, of way out of this hell she is in, longing to be gone with her fellow inmates from this place not of of healing but destruction, this place that seems to have morphed into something between a dance club and a brothel where a beautiful madam presides over equally beautiful young women in order that they may entertain gangsters, and please general punters who come night after night to the club. As ‘Baby Doll’ dances, the world once again morphs and she fights huge oriental warriors, slays dragons, kills mechanized Germans in trenches, and slays robots in futuristic settings. What particularly drew my attention was these fight scenes, for in this movie more than any other I saw that fighting was in some way a substitute for sex. They are either sexually entertaining men, or they are killing and fighting to be free of this fruitless loveless destructive slavery. In a sense the world they are in gives them no identity beyond the beauty and perfection of their bodies, which is interesting indeed, and the lie at the core of their lives. These were young women fighting for a liberation from enslavement to a kind of misogynistic tyranny, a male based woman hating sexually empty slavery to the whims of their keepers, a kind of Stockholm Syndrome dynamic. This contempt for the power of the feminine has to mind its basis mainly in fear. These erotically charged fight scenes, the sexuality exuding from every pore in these brothel scenes, the heightened emotionality of the women’s interaction with each other seems more than anything to allude to some form of deep rooted sexual frustration that pervades not just this film, with its fantastic plot and fascinating visuals, but the plots of so many movies like this, the exchange of fighting for intimacy, particularly sexual intimacy, exchanging life giving or life renewing penetration with that kind of wound that destroys life. Don’t in any way think that I regard this film as kind of timeless classic. Its the kind of titillating fluff that one comes across now and again that underlines an age where we are drifting further and further apart, despite all the psychological and psychiatric technologies available to us, an age where career or duty is eating into our love lives, an age where our thinking is controlled increasingly by corporate propaganda, an age where science and technology is pursued only for money and weapons technology. That’s the real sucker punch, not this nonsense. That being said, I liked this film. It showed me something. In terms of art, I would prefer any number of episodes of the Simpsons, particularly from the first five seasons. Now that’s genius.