One of the nicest things about living in Wicklow is the chips one gets in the local chipper. Linas  chipper, aside from having the trademark Wicklow Town polite pleasant friendliness, cook some of the nicest chips I have tasted since my time as a little boy eating the chips from the Aprile cafe on Richmond Street Dublin City (I wonder if it is still there). Last Friday I went up to get a bag and outside the takeout there stood a man with a sign saying he was an Earthian, travelling the world and he was accepting donations of food. I felt a little odd, indeed, I always feel a little guilty not giving donations but I walked past this person, looking down and seeing he introduced himself as an Earthian, a word representing a concept I regarded as interesting, mainly because I have something of a lifelong interest in science fiction. His eyes were clear, calm and observant. His teeth and skin were in excellent shape. He was dressed in a reflective coat and a heavy belt (which looked new). He wore a white rimmed hat, no sunglasses, heavy socks and a pair of formidable walking boots. This person was not however your typical walker. He greeted each person that passed him rather calmly and courteously. He also didn’t seem to care whether or not they greeted him back and there was an air of calm about him I liked. I didn’t greet him, and I avoided his gaze. I don’t remember whether he greeted me. I went home and ate my chips and mentioned that odd fellow who was looking for food donations outside Linas Take Away in Market Square.

The thing was I met him again. The following Sunday, Iza and I went to a barbecue at the Dominican Ecology Centre at Bayview Wicklow Town, literally five minutes walk from our front door, and once again outside the Domincan College and Ecology Centre (apparently 70 acres in size). And there he was. 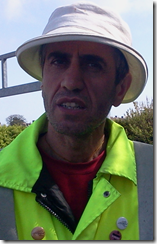 Again he was greeting people and occasionally people were coming from the organic shop and giving him food. Everyone who gave him food got a hug, something I liked to see but made others rather jittery. He apparently doesn’t accept any kind of money. I wondered how he paid for medical expenses or tickets or suchlike. I asked him how he got past airport security since he doesn’t have a passport, doesn’t have a name, and no country of origin. I do believe though he comes from the middle east.  The name, in other words referring to himself as Earthian – a citizen of Planet Earth, a planet with only human borders and political entities and blocs that have been fought over for millennia, wont get one through very highly guarded regulated monitored borders, especially airport security. He smiled and said he doesn’t use airports. I said that’s a good thing, because if you don’t present a passport you tend to get sent back. He smiled again, and he said – sent back where? I mean, he said, if you don’t have an address where would you get sent back to?  The holy naiveté made me smile, and, well its a good answer, one he very obviously had given before to many other people living in the paranoid post 9/11 Earth.

Earthian’s thesis, if it can be called such, is that if a sufficiently substantial movement could be generated to remove the notion of borders on this rather small planet, then one of the prime motivators for war and conflict would simply evaporate. I agreed in principle with him, but considered it rather unlikely this would ever happen, seeing as much of the planets economic systems are run on the notion of private property, capitalism, and profit, which is how things are and not in any way, to my mind, an evil in themselves – just not something that hugely interests me, and definitely interests Earthian rather less. his worldwide travels began after the economic crash in 2008, when, working as a computer engineer, he took the decision to allot eight to twelve years of his life to travel all over the world with a message of peace and certainly with all the hugs he was distributing, love, an acknowledgement of the ultimate unity of the planet despite its many deep divisions, the need for caring for the ecosystems that make it up, and a striving for an end to war. I pointed out he was only one person. He pointed out this proverb which made us all laugh.

I hope never to spend a night with a mosquito, but I do know that my hero Socrates used refer to himself as a stinging fly (a mosquito certainly comes under that description), someone who used ask the awkward questions which showed up the hypocrisy and self deception of the greedy and the thoughtless. Then again lets not pursue that analogy to its logical end, considering what horrible things happened to Socrates. Anyway we talked for a while and then we wandered into the organic shop inside the Domincan grounds and Earthian (I still cant get used to calling him that) stayed outside. we wandered round saying hello to people, talking, and visiting the animals, most of whom were going to be slaughtered ( its always disturbing to see creatures fed the finest foods, looking exquisitely beautiful, in the best of health, only to know they only exist in such a state to be  devoured by those who care for them) After a while I returned to Iza to see her sitting with our friend, engrossed in conversation about his travels. There is hardly a country he has not been to. I believe he is going to England next, and then to Iceland, a difficult place to get into. We offered him money before we went our separate ways. He refused. We asked him what he would like. He said whatever we wanted to give him. We went into the organic shop and bought him some goodies, and gave them to him after he came back from the toilet. He hugged us both.  And then he was gone. An interesting person. I kind of miss him now.