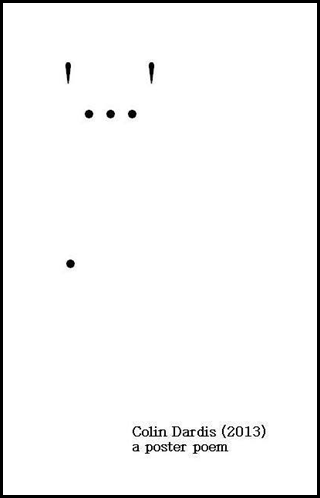 So much of Irish contemporary poetry is to say the least disinteresting. It is tired, fearful of innovation, hopelessly swamped with a vast rich cultural and historical context that should give it a deep well of innovation to work from, a launching pad to new modes of self expression. Rather than doing this it this very context seems to be employed as a constraining factor, a series of carefully defined determinants as to what constitutes good poetry and at worst, what is and what is not poetry. This distressing precedent remains unhelped by the lack of real criticism in Ireland. We are after all a small island where everyone knows everyone else. Moreover, because of our complex and fractious history, we are reluctant to tell each other what we really think. This makes us even more reluctant to differentiate between honest criticism when it is given and politicking, or worse than politicking, being unprofessionally personal.  All this, this matrix of dissimulation and politeness, leads to the aforementioned conservatism and safeplaying when it comes to the arts. And this leads me to Colin Dardis’ Poster Poem.

Dardis’ poster poem reminds me more than anything of a crossover between the written word and a piece of installation art. Its simplicity, two inverted commas separated by an ellipsis followed by the final full stop at the end of the page, belies the complexity of the message being conveyed by this remarkable piece. The ellipsis is what I would first of all like to concentrate on. Used usually to either substitute for a repeated phrase in a sentence, when it is completely obvious to the reader what the message is, for instance in a dialogue between two people :

“I really wonder if you love me…”

And she smiled warmly.

In this context the smile from the second person fills in the blank caused by the ellipsis in the first sentence. In the context of the poster poem the context of the ellipsis is filled in by the title of the poem, in other words, POSTER POEM BY COLIN DARDIS. So what does this tell us? That the ellipsis itself within the quotation marks is the poem, a blank, a pause between something spoken and unspoken, followed by an end, a silence that is absolute. What could this possibly mean? This poem is about absence, about (to employ an Eliotian phrase) a raid on the inarticulate, an aporia, about the void that exists within and surrounding our existence, the questions we ask in these silences but cannot adequately muster words as yet to properly codify or even seek to answer (the work itself of the poet and the writer). For in speaking we speak about something, but also in speaking about something we have to articulate about that which is not, as all sentences have within themselves their borders and their definition. Thus Dardis has found in this remarkable piece a code to mark the emptiness within which we seek to define ourselves. the question remains of course whether or not this is poetry. The word poetry comes from the Greek term poeio, meaning I create, in terms of the use of imagery, words, symbols, word associations, rhythms, along with musical, tactile and alliterative associations. Overall a poems job is to give a picture of what it is to exist in the world. In terms of the analysis above this would be a poem delving into the negative space of language. It talks about the unspoken, that part of dialogue and description in which we the reader are called to experience the anxiety called out by this poem, and/or to fill in this space with our own minds and our own feelings and our own imaginations. I am reminded of the time I went down to the O Bheal readings in Cork City, MC’d by Paul Casey and someone, having been called to the mic to perform, stood up and smiled and closed their eyes for thirty seconds. Someone in the audience called on the person taking up the mic time to read a poem. The poet concerned replied : “I just did”, and sat down. No one knew what so say and the next poet was called to read.

Dardis’ poem is daring, interesting and innovative. It remains for me a very successful piece of art and a fine poem. Kudos.

Colin Dardis is a poet, editor and arts facilitator, based in Belfast, Northern Ireland. His work has been published in numerous anthologies, journals and zines throughout Ireland, the UK and the USA. His most recent collection, ‘Dōji: A Blunder‘ was released in Nov ’13, from Lapwing Publications.  Go Here for more info